Dive into the history of one of the world’s most popular genres, and discover what it takes to produce authentic reggaeton hits you love!

Read this article and get to know some interesting facts about Reggaeton and how you can produce your own reggaeton hit:

Reggaeton is one of the most popular musical genres in the world today — if you want to make a name for yourself in the genre or simply want to integrate it more into your own unique style, one of the most effective things you can do is to understand its origins. This way, you’re better able to understand what makes it unique and how you can get into the mindset of the producers and artists that helped make the genre what it is today!

The genre’s roots are in Reggae en Español, a popular genre in Panama in the 1980s. This hot new musical trend found its way to Puerto Rico, where it began to take form in its own right. Music often evolves fastest when it crosses international borders as a wider variety of influences combine together to form something new, and this is certainly the case with reggaeton. Since its inception, it has gained an increasingly broad range of influences, including hip hop, Caribbean music and other latin genres all mixed into one. The vast majority of reggaeton is in Spanish, even today, owing to its significant hold in Latin America.

It quickly became a dominant genre not only in Puerto Rico, but also in Panama, the Dominican Republic and other countries across the Caribbean, Central & South America. Reggaeton was mostly focused in Latin America for quite some time, but one of the greatest catalysts for that change was the 2004 hit song Oye Mi Canto, a collaboration between a number of artists, including Daddy Yankee. His following grew as he attracted more attention from the hip hop scene, introducing reggaeton to a large audience in the United States. This bridge between reggaeton and hip hop helped cement its place in the Western musical lexicon, along with its rise in international status across the entire world.

Since then, its influence has continued to grow, even making it onto the Billboard charts, with songs and albums often hitting in the top few results! One of the most notable examples of reggaeton fame is Despacito, by Luis Fonsi and Daddy Yankee, which racked up over a billion views in a matter of months and led to Daddy Yankee becoming the single most listened-to artist on Spotify for a time. The song’s impact didn’t just impact his career, though — this confirmed the viability of Latin music in an international market, especially the US. This one song had such a massive impact that it’s hardly an exaggeration to say it opened up a new market!

Over the past decade, its popularity has grown so much that it’s even becoming a staple in pop music in the United States. Its reach doesn’t end there, however — the impact of reggaeton rhythms has even extended into genres such as K-Pop! Listen to music from artists such as BLACKPINK, TWICE and BVNDIT and you’re bound to hear a bit of reggaeton influence quickly! Even when the language and genre differ, there’s one piece that carries through to many other contexts: the rhythm, or to use a more contextually appropriate term, the riddim.

This idea lives at the heart of not just reggaeton, but many latin genres that primarily focus on rhythm. A riddim implies a specific rhythm (which is where the word riddim comes from), played by specific instruments. Production elements such as layering and processing methods vary considerably, especially given the range and capabilities of modern music technology, which have allowed the scope of this genre to evolve considerably, but if you listen closely, you’ll find that there’s a remarkable level of consistency across the genre as a whole.

Perhaps the most popular riddim in reggaeton is dembow, the classic 3+3+2 rhythm over a 4-to-the-floor kick drum groove. While not always correct strictly speaking, if you ask someone to think of reggaeton, this is likely what will come to mind. The culture around riddims is less about iterating on the rhythm itself, but on what is added around it. New vocals, different sounds and outside influences from other genres — the riddim forms the percussion backbone used to build the rest of the song, which keeps reggaeton remarkably grounded in its roots.

This leaves room for greater emphasis on vocals, both sung and rapped. Reggaeton is often associated with explicit themes, so much so that it’s drawn a great deal of criticism from both artists and non-artists alike. This has led to a number of artists creating reggaeton with different themes, and the genre has continued to become more widely accepted, to the point where it’s now almost inescapable!

Creating your own reggaeton

Now that you have a bit more context on the rise of the genre, how will this impact the reggaeton tracks you create? Does it encourage you to branch out and combine it with other genres expanding your musical palette ... or do you want to go even deeper into its roots, find the sounds that stay true to the genre and go with the tried and true rhythms? Neither is right or wrong, of course, as is always the case with music; but regardless, this is one case where it makes sense to color in the lines a bit to really understand what the genre is all about.

If you want to remove the mechanical parts of this, laying down the backbone first so you’re free to explore and create with as little frustration as possible, check out Beatmaker RICO. All your kicks, snares and auxiliary percussion are already dialed in, with a variety of styles and tweakable loops at your fingertips. This is perfect if you find it challenging to start from a totally blank session, as you can lay down a beat without scrolling through samples or being limited to a static audio loop that never changes.

Production should be dynamic — and reggaeton is a perfect place to apply the principle of starting with what already works. What you build from there, how you create, is up to you ... RICO just provides the initial spark to get the juices flowing. Give it a try, bring the energy and have fun producing some reggaeton! 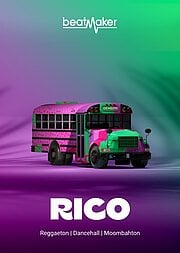